Begin with your fingers on the home row. The home row is the middle row of letters on your keyboard.

These keys are usually marked with a raised dot or dash to help you find the keys without looking. The rest of your fingers line up in the adjacent keys – shown highlighted in the illustration below.

To find out how fast you type, just start typing in the blank textbox on the right of the test prompt. You will see your progress, including errors on the left side as you type.

You can fix errors as you go, or correct them at the end with the help of the spell checker. If you need to restart the test, delete the text in the text box. Interactive feedback shows you your current wpm and accuracy.

In order to complete the test and share your results, you need to get 100% accuracy. You can review your progress for this session with the feedback chart below. Just hover over a dot to see what your average speed and accuracy are for that key.

Need help composing your next resume or cover letter? Do you struggle with writer's block when it's time to start an essay or report? Try a week of Copy.ai for free. Copy.ai is like having a team of writers at your fingertips, offering suggestions to help you get started and keep going on all your writing projects.

Test begins when you start typing...

This feedback graph will follow you from page to page for your typing session. You can see more details by mousing over the graph. The session is reset when the tab on your browser is closed.

More about the Dvorak Keyboard Layout

Dvorak is a keyboard layout for English patented in 1936 by August Dvorak and his brother-in-law, William Dealey, as a faster and more ergonomic alternative to the QWERTY layout. Dvorak proponents claim that it requires less finger motion and as a result reduces errors, increases typing speed, reduces repetitive strain injuries, or is simply more comfortable than QWERTY.

Although Dvorak has failed to replace QWERTY, most major modern operating systems allow a user to switch to the Dvorak layout. iOS does not provide a system-wide, touchscreen Dvorak keyboard, although third-party software is capable of adding the layout to iOS, and the layout can be chosen for use with any hardware keyboard, regardless of printed characters on the keyboard. 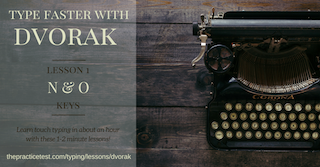